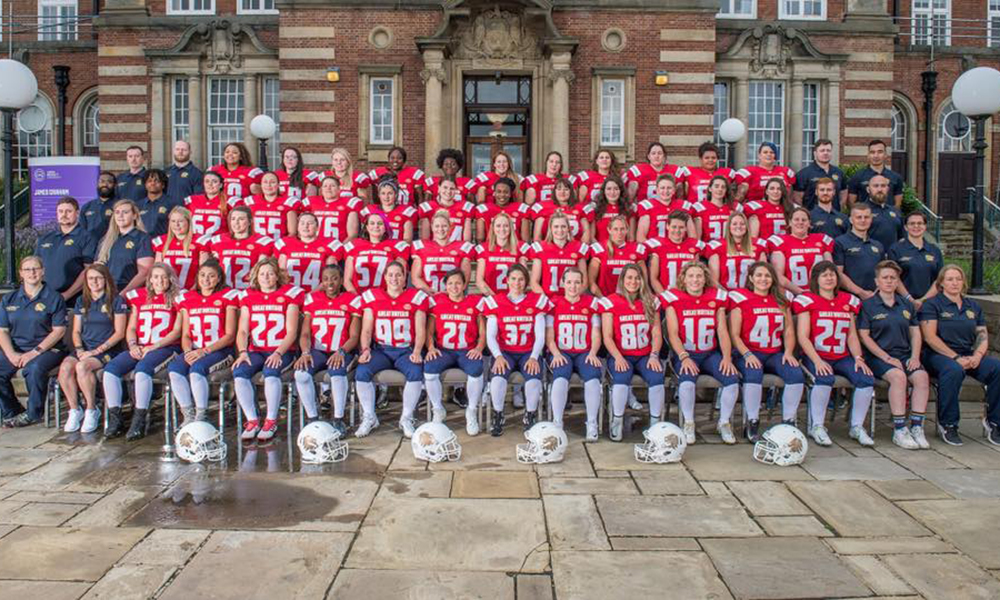 From UOC Spitfires to Team GB

Moving to Chichester was so different for me, I live in London so I’m used to the hustle and bustle of a big city, and Chichester was a HUGE change! It was so nice to be in a smaller uni, it was much more of a community - everyone knew everyone, everyone was friendly, and that was something I really wanted, and Chichester definitely delivered on that on all fronts!

﻿It gets hard sometimes and ﻿that’s when knowing everyone really counts because there is ALWAYS someone you can hang out with and do something with.

﻿In my third year, I started playing for the University's American Football team, Chichester Spitfires. I was on the basketball team already, and I wanted to try something new. I knew one of the boys on the team and he signed me up for try outs! I had no idea what I was doing and I was just there to have fun, and then Coach Chris said he would love me to play O Line for the team. One thing﻿ led to another, and then I was recruited for a women’s team - London Warriors and it all started from there!

We competed in a competition called The Diamond League which is women’s 11v11 from three regions: north, midlands and south- and once the finals are over, we are sent an email asking if we would like to trial for the GB practice squad. Initially there was around 80 girls that were training, our final roster is 45, so you can imagine how scary it is knowing nearly half of you won’t play! It was the most nerve wracking thing waiting to find out whether you are chosen is so intense!

As ﻿American Football is considered an amateur sport in England, I had to fund myself to be able to get to the European Championships to represent GB. I started a GoFundMe page to get my funds up, and the support was incredible. So many people, coaches, other players wanted to help and share and donate whenever they could, and it’s always so nice to know that those people support you and are willing to just spend their time sharing let alone donating!

Since we have been here, the support has gotten better and better! We’ve been given socks for all our games courtesy of Arrival Athletic, lots of electrolyte tables and gels from Science in Sport, Double Coverage have been writing articles on us, Efe Obada who plays for Carolina Panthers has given us a shoutout - it’s just been incredible! Women’s AF and the support behind it over the last year has just grown SO much and it’s incredible to be a part of!

For more information on our courses visit: chi.ac.uk/courses

Book onto an Campus Tour: chi.ac.uk/campustours

6 reasons you should study a Postgraduate degree

Keeping your mental health up in lockdown

7 reasons why you should do a Degree Apprenticeship!

Why you should do a semester abroad!
Popular

What to and NOT to bring for Accommodation!

Why you should do a semester abroad!