My favourite course memory is creating ‘Bullet In The Radio’, a story about the death of Mark Duggan which led to the London Riots. Being a young teenager at the time when the riots happened it was a surreal feeling to be able to create such a memorable performance to our audience with such a talented cast. 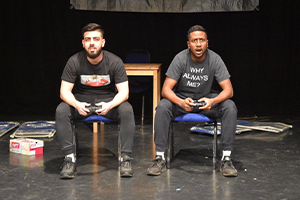 My favourite SU Event has got be Rag Race without a doubt! Rag is an all-day event around Bognor Regis where you dress up in fancy dress with your closest friends from your course. Even friends from back home can attend! Rag raises a lot of money for different charity each year. It’s good to know that your alcohol consumption at bars goes towards a good cause!

My favourite night out is either WSIHE or a vestry. I can’t decide. The best thing after a winning a game is going to WSIHE Wednesday to celebrate with your society and the other society. It was just one big family at the end of the day. 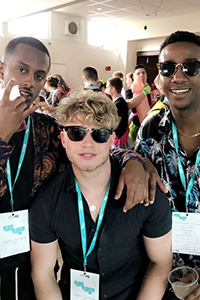 I was part of the Men’s Football for 3 years which was hard, especially doing an Acting Course which meant my day was always jam-packed on Wednesdays. However, I enjoyed being a part of a society and I say to everyone that it’s the best thing about being at university. It’s like having a separate family outside of your course. 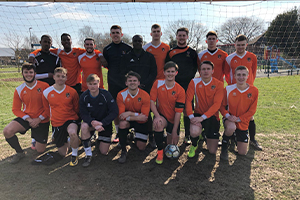 My overall experience at Chichester was great, but it was a lot to take in at first. Especially being from South London, the big city with a lot constantly going on, to then moving down to the coast where it was so peaceful and quiet.

However, there was a reason why I was drawn to this University… I just didn’t know it yet. Before I joined, I was accepted into a drama school. From early on I knew that, with this specific journey I am on, drama school was not going to get me there. I didn’t just want to be an actor who could only adapt to script, I wanted to be an artist who could give a voice to the voiceless and The University of Chichester BA (Hons) Acting gave me that artist license I needed.

It was hard to begin with, especially the first year with so much going on and being the first year of this course, but as soon as Evi Stamatiou became our Course Leader in second year everything changed. We all had our one-to-one meeting with her, we spoke about our goals & dreams and she pushed me to get to where I needed to be now. Also I’d like to give a special thanks to Dr Louie Jenkins, my guardian angel throughout my 3 years on this course. Thank you for giving me my artistic license and pushing me to get the work done, without you I wouldn’t be in the position I am in.

I am now a full-time actor who is signed to a fantastic agency with great clientele. This wouldn’t have happened without the famous Chichester showcase! I have accomplished so much in the first year of graduate life alone and there is so much more to come.

I couldn’t achieve what I have done without this University. I am in great debt to them. I’m constantly getting better, thriving, and chasing my dreams. And when I get to where I’m destined to be, I know where to start with my gratitude! 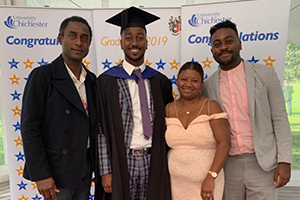 Being a fresher during COVID-19

What to do at the SU

Why living in Stockbridge is so great!

Joining a team or society will make your University experience!